Ethereum Is $300 Leaps Away From a New All-Time High

Ethereum was steadily following the descending trend line like BTC after reaching its new all-time high early last month. However, it is slowly breaking out of that trend and almost leaps to catch its ATH and further create a new ATH.

At writing, Ethereum is gradually approaching its ATH and trading at $4573, a 3.2% drop in the last 24 hours. In the last seven days, the curve has been moving up, which is good news to investors and traders. The ATH is acting as significant resistance, and if the price breaks above the opposition, we might be seeing a new all-time high at $5400. Bitcoin is still hovering between $55k and $58k.

Ethereum strongly indicates an outperformance on BTC in the near future. The second most valuable coin had begun showing a bit of weakness after reaching its all-time high to reach $3960.

However, the coin has begun surging from its support and pushing upwards after a long lower week appears, indicating the buying pressure was about to start.

The decrease was just a retest, which helped the ETH price surge back to $4500 in just a few days. If the market were to break the support level at $3960, the next support area would be at $3650, which is a 0.382 Fibonacci retracement level.

On a short-term 2-hour chart, ETH/USD indicates a breakout on a descending resistance line making it support. This is one of the things which helped traders see that ETH is taking up the bullish trend on serious matters. This also shows that the short-term correction for ETH has come to an end.

However, looking at the ETH/BTC pairs looks like ETH could go all the way. On the daily chart, ETH is trading inside a symmetrical triangle. The triangle might act as a neutral pattern, but it inspires an upward movement of price, meaning that a breakout would be more like a breakdown.

Ethereum has been receiving a lot of support from DeFi applications that have been operating on ETH’s blockchain. According to analysts, these might be one of the great reasons to make ETH greater than Bitcoin soon. It might also help ETH become dominant.

The analyst still holds that ETH might be Hitting a new and final all-time high, ending the year at $6000. All odds are for ETH, especially now that it has shown a dominating bullish trend of 3500% against Bitcoin’s 380% throughout the year.

There is no limit as to how much ETH might reach. However, we foresee ETH hitting $10000 by the end of the first quarter of 2022.

Additionally, market indicators support the bullish continuation. The MACD looks positive and also moves upwards as the short-term MACD line is moving faster above the signal line. The balance volumes are all green, indicative of the strong bullish trend.

Furthermore, at writing, the RSI is above 50 and increasing, which means that the buying pressure is still intense. 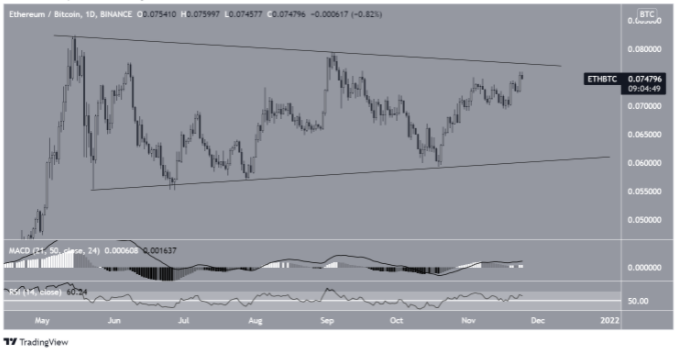 Using the Elliot wave analysis, the ETH/BTC pair is in wave four, taking the shape of a symmetrical triangle. Another upward trend might form when the triangle is complete, which is likely to ETH to new highs.

After the Terra-LUNA Fiasco, the UK wants to regulate Stablecoins

44 countries to meet in El Salvador to Discuss Bitcoin; Major Adoption Ahead?

Terra’s $2 billion Bitcoin reserves: Where did it all go?

This Week’s Recap: LUNA and UST Fall Hard, Will They Resurrect?

A BAYC NFT Was Sold for 200 USDC: A Possible Tax Evasion Tactic?